Bald IS Beautiful - update on my nephew, Marcus

Below I'll copy and paste what my sister wrote about the head shaving party held in honor of her son, Marcus. I'm posting some awesome pictures of the event! I am so glad that Marcus is doing so well and that so many people care about him and his family. The following pictures are 1) Many of the kids/teens who came to support Marcus in a head-shaving party. 2)top left to right: Mr. Dave Clark (school councelor), Kyle, Jeremy, Mr. Bob Henke (Vice-Principal) bottom L-R: Drew, Marcus and Trevor - all giving their meanest looks. 3)Marcus, Uncle Brian, Cousin Jenni (who donated her time and efforts to do all the shaving), Cousin Kevin, John (Marcus's dad), brothers: Noah, Aaron and Jackson. Karin - Marcus's mom doesn't seem to appear in any pictures - she was the photographer. :-) 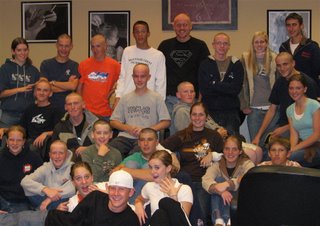 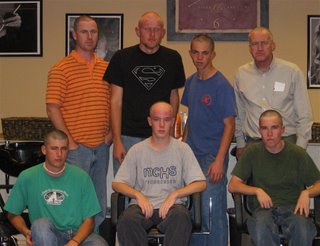 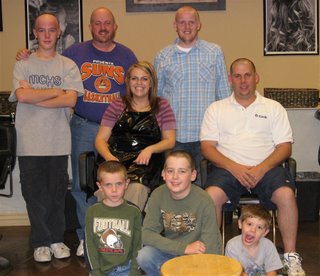 Wow! What a week we had! Wednesday we went to all the dr.'s and everything is looking good. Marcus has been pretty tired, and only went to 2 days of school this week, but he had a lot going on as well. After the long day at appointments we came home, had dinner then ran off to the Salon. My cousin, Jenni, volunteered to shave anyone that wanted it. So we met at her her Salon. What we didn't expect was that we had 22 people lined up to shave their heads along with Marcus, PLUS we had 20 girls there to help cheer on the boys, PLUS Marcus's school councelor and the VICE-PRICIPAL showed up to shave their heads as well, along with 2 brothers,an Uncle and a cousin. That place was so crowded, but it was a sight to see. When each boy got in the chair, all the girls ran over and ran their fingers through it for the last time. As soon as his turn was done, everyone would cheer loudly. I couldn't believe that one boy shaved off 5 inches of hair that took him 3 years to grow out plus it was soft and curly! When he went up for his turn, the girls took turns with scissors cutting curls off wishing they had his hair. It was just amazing. After it was all said and done, a co-worker of John's called a reporter for the local newspaper and now they are working on a story for monday. We tried to get everyone here for the photogragher, but we only ended up with 13 bald heads. It has been such an emotional support for Marcus that he hates to wear his beanie hat now. He is proud to be a part of his marching band buddies who all had to face snow the next morning... YIKES. " - - - written by Karen Russell

Here is the link to the news article: BALD IS BEAUTIFUL

The following are pictures of: 1)Marcus before - his hair was coming out in handfulls so he knew it was time for a shave! Then the picture of 2)Marcus After. He looks even more handsome afterwards! 3) John before the shave (Marcus's dad with a very nervous look on his face and his sons giving him bunny ears). 4) Marcus shaving his dad's head - looks like he is having a good time doing it too! 5) John afterwards. What a neat dad he is! 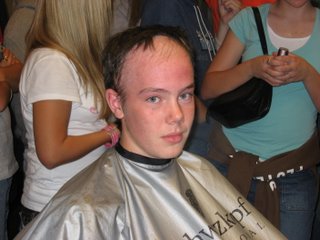 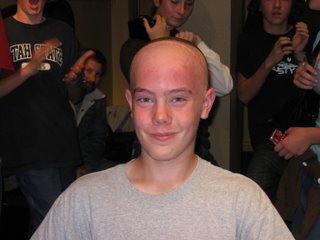 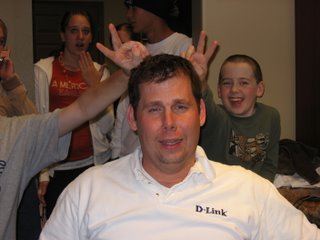 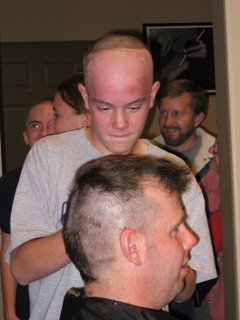 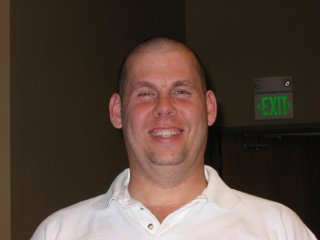 
EDIT: This video has been removed at the request of copyright owner Sony Electronics, Inc. because its content was used without permission

This commercial annoys me on so many levels. First of all, being born with half a heart is a very real and serious heart birth defect. I know several families who have children born with HLHS (hypoplastic left heart syndrome)through my online CHD (congenital heart defects) groups. If it's not bad enough that the commercial makes light of being born with "half a heart", the commercial continues with the doctor having been born with 2 hearts! Wow, how convenient. THEN... she does open-heart surgery on this guy - on the sidewalk, in the rain - the man wakes up in the ambulance to see a heart-shaped scar on his chest. Oh puhlease! Then he asks the doctor what she did with the other half of her extra heart and there's a little "orphan savant" boy with a heart shaped scar on his chest and he calls the man (who just had heart surgery) "papa'". If the man is his dad then he isn't an orphan afterall, right? Another thing, if the doctor gave the man 1/2 of her extra heart and then gave the other 1/2 to the boy... why doesn't she have a scar on her chest? How did she do the heart surgery on herself? Oh wait... maybe she kept the extra heart in her pocket just for emergencies just like this one.

My daughter has had 5 heart surgeries and I just checked... nope.. not one scar in the shape of a heart. Silly us taking her to the hospital for her heart surgeries when we could have just had a stranger perform it on the sidewalk, in the rain, without anesthesia or ventilation, etc. Can you imagine the money we could have saved not staying in PICU for weeks at a time?

I also noticed near the beginning of the commercial they clicked on "ending for women". Does Sony really think women are that dumb?

I welcome any thoughts and opinions. (but no spam)
Brilliantly written by Nancy Jensen at 9:01 PM 17 comments:

I don't care for statistics.

I've been thinking about statistics and how they are really just averages. But as I was thinking about the many times since Jessica was born that we have been given statistics - we are always in the small percentage. Here's what I was contemplating:

If I remember the statistics correctly, Jessica had a 2% chance of being born with any birth defect, 1% of which was CHD (again, I'm not sure of the exact statistic here). She was born with a complex CHD.

When Jessica had her first heart surgery at the age of 5 months old, we were told she only had about a 2 or 3% chance of having any complications with her surgery - it was a very routine placement of a shunt. Jessica had a stroke which affected her speech area of the brain and the right side of her body. She had to have on-going therapy to regain strength in her right side and we used sign language to facilitate speech.

As Jess got older the peds neurologist didn't think Jessica had a very high chance of learning to speak. (we weren't given a specific % but weren't given much hope) Jessica was 2 yrs old and could pretty much only say "mama" and "dada" but could sign over 80 words. We were told that her primary way of communication would be sign language. Well.... by the time she was 3 yrs old she was talking pretty well - and NONSTOP (still)!

When Jess was 3 yrs old she needed her shunt replaced. We were quoted the 2 - 3% chance of her having any complications and I reminded them that she already had a stroke. We were told that it didn't really put her at higher risk. This time she not only stroked but hemorrhaged for 4 days! She wasn't expected to survive the day on the 4th day and we were told to come and spend her last hours with her. By the afternoon the CT surgeon told us that "A power far greater than ours saved your daughter today - - we just stood here and watched a miracle". She was pulling through. Almost a week later she was off the vent and when she woke up we found she was blind and paralyzed on her left side. Long story short: the neuro-ophthalmologist didn't give her much of a chance of seeing again since the damage was done on the brain - not the eyes. She sure showed him! Yes, she wears glasses and her vision isn't perfect, but she can SEE! hehe... Of course she had a high chance of never learning to walk again... but she did! (she is in the motorized wheelchair to conserve energy).

Jump ahead (through many other miraculous, though difficult times) to 2004 when Jess was admitted into home hospice because of lung bleeds. Less than 10% of hospice patients come out alive (or improve and don't need hospice again... at least not for a long time). You guessed it, Jess improved and has been out of hospice for over a year.

Jess has out-lived everyone's expectations - including mine. She has suffered many more problems than anyone imagined but has come through like nobody ever expected possible.

The last visit to the Peds Cardiologist he said, "I have given up trying to predict what Jessica is going to do. Many times she takes the hard road but then turns around and comes through.
Brilliantly written by Nancy Jensen at 12:54 AM 2 comments: 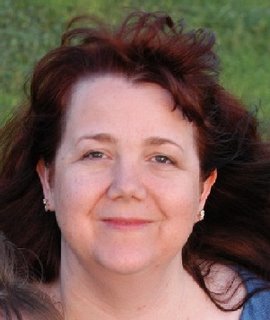 Brilliantly written by Nancy Jensen at 10:20 PM No comments:

Remember the post I made: "Who in the World?" with this picture: 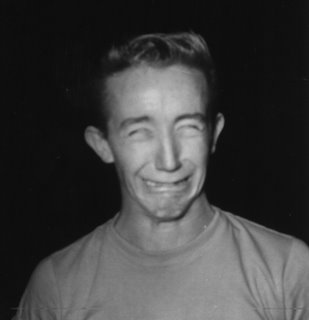 Yes, that was my dad when he was in college. My parents came to town and my mom brought some other pictures of my dad for me to post here. He wasn't 100% goofy... at least not ALL the time. ;-)

The following photos were of him as a toddler, a more serious one when he was in college and then one of him and my mom that was taken in recent years. I'll have to look through my scrapbook that I made several years ago and see what other pictures I can come up with. I remember my mom getting after my dad because he would pull silly faces whenever anyone tried to take a picture of him. It's nice to see that there actually are pictures of him being serious. 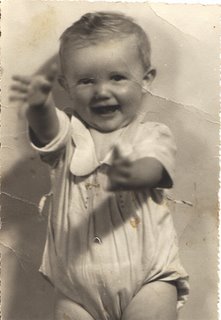 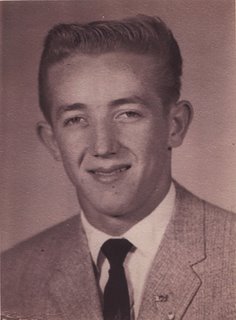 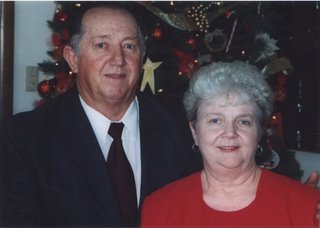 Brilliantly written by Nancy Jensen at 1:27 AM No comments:

Something to think about

I was very touched by something that a friend of mine posted on her blog. Jenny's Thoughts The thing that touched me the most was not even the event that she was writting about. It really caught my attention when she said:

"I hoped I would love God more by the end of the day than I did when I woke up."

Something to think about....

Thanks Jenny. :-)
Brilliantly written by Nancy Jensen at 1:47 AM No comments: