Updates on Jessica and Bella

In my last post we thought Jessica had broken a tooth... or at least it seemed to be cracked all the way across the tooth and we were hoping to get her in to see the dentist ASAP. Well, thank goodness Jessica's dentist was able to get her into his office the very next day. And the best news is that her tooth wasn't as bad as we thought! They were able to fix it completely. Look at that smile. She is so glad she won't lose her tooth! 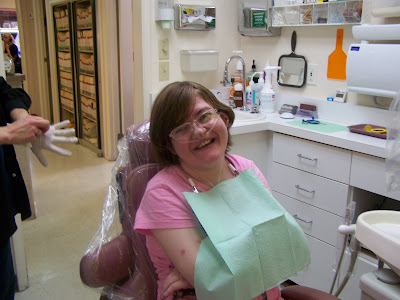 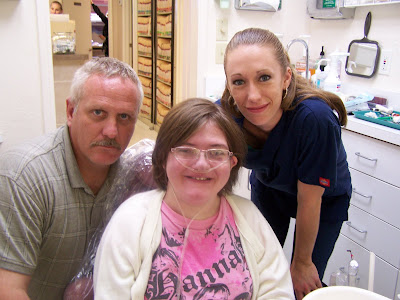 Unfortunately Jessica didn't handle the pain very well and she became exhausted. We had a rough night that night and she didn't get to sleep until almost 9am the next day. We've had several bad nights recently and it's wearing on us all. Actually, three days after Jessica saw the dentist she got very sick; throwing up and diarrhea for a couple of days. Then I got it. Thankfully nobody else in the family got sick except that Austin felt nauseated and missed one day of school.

Now for an update on our kitten, Bella. As I wrote in my last post, Bella's stitches from her surgery (spade) came undone and got infected. Bella had to be taken in for a 2nd surgery to remove the infected areas and re-stitched. This time with wires. She got stuff stuck in the wires and we were worried about her incision being clean so the 24-hr emergency place suggested we get a baby t-shirt and put it on Bella. We got a newborn size, put it on her and it was HUGE! LOL! We got a large safety pin and pinned it. We also tied a knot in the end of the t-shirt so it would stay over her wound. This lasted about 3 hours then she was almost out of it so we ended up taking it off.


Karl went to PetSmart to purchase the special collar and even the smallest one was too big! Look at poor Bella, she could hardly even hold her head up much less eat or drink! LOL


Is there a kitten in there somewhere? (Brandon is trying to help her) 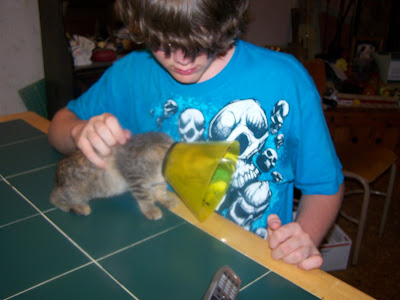 Are you getting the Disney channel or is that a lampshade from the wild party last night? 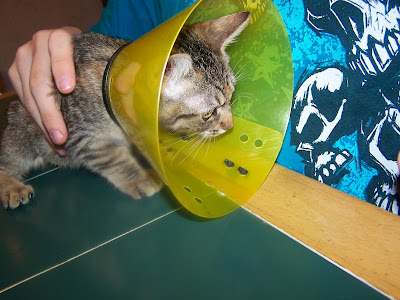 Fortunately Daddy is such a handyman and he was able to cut it down and reset the holes, etc.
What a silly little girl! 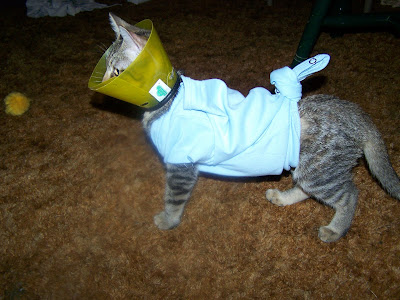 Here is a little video of Bella all decked out.


Here is Bella a few days later playing with an empty medicine cup. We took the video in the bathroom so she wouldn't run off like she usually does. She reminds me of Jessica... she doesn't let anything get in her way! That cone on her head didn't slow her down one bit. (If the video seems a little long (about 2 1/2 min), it's ok to not watch it all. Jessica does appear in the video several times and seemed to be competing with Bella for the center of attention. hehe!) Enjoy!


ps
I am posting from the family computer because my internal Internet card went *poof*. We are going to have to take it in and see what can be done. Maybe we'll just buy an external Internet card. We just had to buy a new faucet for the kitchen sink because the old was leaked and sprayed water all over anytime we turned it on. Now the stopper in the kid's bathroom sink is broken. Oh, the joys of home ownership! Of course the laptop thing isn't a major crisis or a home ownership thing but it is important to me.... and to the kids. They want me to use my laptop in my craft room and let them use the family computer. LOL

Brilliantly written by Nancy Jensen at 12:35 AM 2 comments:

If something can go wrong it will? Yes, that would be us!

Jessica cracked a tooth last night and is from the tip of one side of the tooth 3/4 of the way across to the other at a diagonal - which is dangerously close to the g...um-line! I am just praying it doesn't brake off! We are going to contact the dentist early Monday morning and have her seen. We are going to have them just pull the tooth. The last cavity that she had filled just sent her over the edge and it took several days for her to recover from the ordeal. I just know she is going to have a hard time with her tooth being pulled and having it heal but I just can't see putting her through having to have a crown. She is too old to go to the CRS clinic and we sure can't afford a crown... in fact, we aren't even sure if our dental insurance will cover her or not since we haven't had to use it for her yet... but we just want to do what is best for her. She even said: "Let's just pull it out and get it over with!"

Also, we had our two kittens that we kept, Hanz and Bella, spade and neutered last week (at the tune of around $150 including shots & tests for feline leukemia since Bella's eyes constantly run and that could be a symptom of FL but fortunately both kittens are negative for that fatal illness)... well, Bella's wound started to open Friday afternoon after the clinic closed, of course, so I had to call the after-hours place. $85 just to be seen! No thanks... we bought the smallest cone thinggy (that the emergency pet place recommended) and put it on Bella. Poor thing couldn't even lift her head, it was so heavy! So Karl cut it down, drilled holes, etc, so it would fit her. All this happened just as I was trying to get ready to go to my Creative Memories workshop Friday afternoon. Bella wore the cone over night. So on Saturday we took her back to the clinic and $54 later Bella had been sedated, wound cleaned because it was infected and stitched re-done in wire - which has to be removed in 10 - 14 days. She also has to wear her cone until then. So last night I gave her the meds (which she hates)... and I noticed that she has carpet fibers caught in the wires. The vet told us that they leave pointed wire edges out so that the animals won't lick the wound but Bella was licking anyway - hence the collar. Well, what do I do about the carpet fibers being caught in there? I tried to gently tug at some and she went 'postal' on me. I decided to put her to bed and call the 24 hr place again today.

The vet was really nice especially after we told her about Jessica. She gave us some cream to put onto Bella's wound for free and wrote down the emergency phone # for us and wrote her name down. She told me to be sure and mention her name and the emergency place might see us free of charge as a courtesy if they can't get a hold of her. I'm going to call them this afternoon and see what to do about the carpet fibers. The clinic won't be open again until Tues. Well, we have to get Jessica's tooth taken care of on Monday anyway... that is if it doesn't break off before then!

I don't know why just one thing can't go right?! I was up late last night (haven't been to bed yet) with Jess while she was in a lot of pain trying to go poop. No, she isn't constipated. It's just that hard sometimes. :*( I've been trying to jump through the right hoops to get Jess into a pain specialist who might actually know how to treat her type of pain(s).

I'm finally headed to bed (6:30am - which is actually the earliest I've been to bed in about 5 days). Pray for peace. Pray for a quiet day and a restful day today. Pray for us to be able to get Jessica's tooth taken care of tomorrow and for her to be able to handle it well. And even if it seems silly, please pray for our little Bella's wound to heal quickly. She brings so much joy to our family - especially to Jessica. Both kittens do. Thankfully Hanz is doing well and trying to take over Scamper's duties of getting into trouble. LOL (Scampers went to his new home a week ago. I hope he is adjusting well.) Also, don't forget to read my post below about Jessica's bunny, Mary. Thank you so much!

Mary hanging out in her favorite spot: on Jessica! 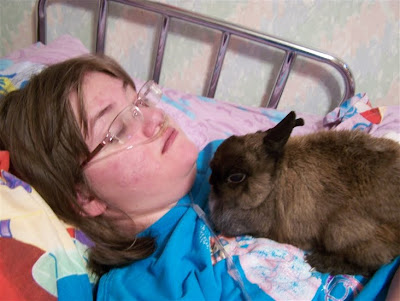 These two loved each other and Jessica held Mary like this almost every day. Here is Mary in her small home in Jessica's bedroom. Mary knew her way home from the bathroom, down the hall to the rug in the kitchen doorway, then a big hop across the hallway into Jessica's room and into her cage. Mary loved to chew on empty toilet paper rolls. She would pick it up and wave it around. She would sometimes even throw it with her mouth! She liked pushing that green ball around her cage as it makes noises when it moves. Mary spent the nights outside in a larger cage and came inside to hang out with Jessica in her room during the day. Everyone who met Mary fell in love with her instantly. We all miss her very much - especially Jessica! 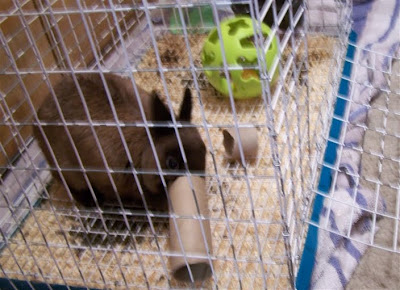 Mary was named after a character that Jessica made up several years ago. Mary Elizabeth Potter (the character in Jessica's book) is Harry Potter's long-lost twin sister. Jess has written and illustrated several books about her and her adventures. (I dare any editor to try to make sense of her writings but I know exactly what Jess wrote. LOL) Jessica's e-pal, Matt, sent Jessica a journal that he personalized for her to write all about Mary Potter. That was her first book and it took her about 4 years to complete. Her next books also include some characters from Lord of the Rings! I believe that Jessica recently introduced Link (the character from the "Legend of Zelda" video game series) and Pokemon. All very fun and exciting!

We are starting our hunt for another bunny. Mary was a true dwarf and as you can see, was the perfect size for Jessica to cuddle with and hold. We would love to find another dwarf rabbit - preferably a black one since Jessica would like to name it: Professor Snape! (perfect name if you ask me!)

Please pray for her to be comforted and for us to find her another bunny companion. She misses her cousin, Marcus, immensely and now she missed Mary too.