Jessica and I have fun in the craft room

I am re-posting this from Jessica blog, Jessie's Favorites.

We love making fun things in my craft room. Jessie decided to make a card for her grandma. I had received a fun stamp in the mail and I stamped the image for Jessica. She then colored it with her markers. Today she decided to use one of my punches and some of my fun paper to make a card with the image that she had colored.

Here she is putting some brads on the card. 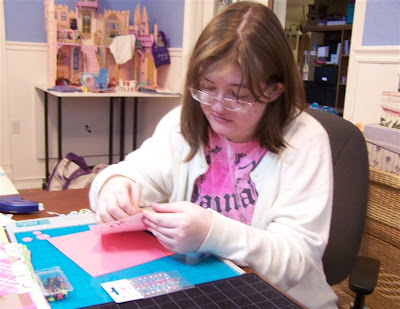 Securing the brads onto the back of the card. 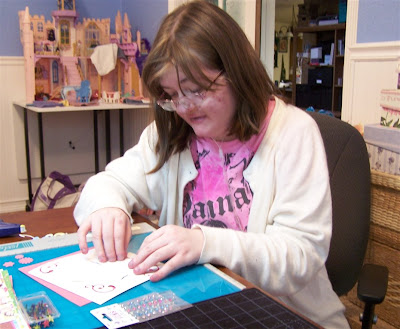 Somebody is having fun! 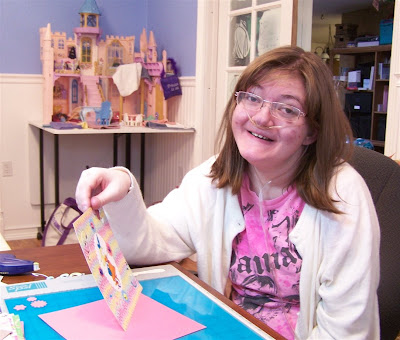 Here is the card so far. 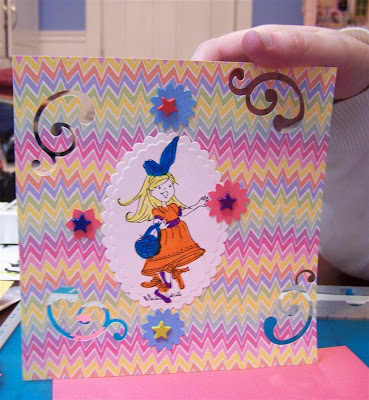 All done! Time to relax. 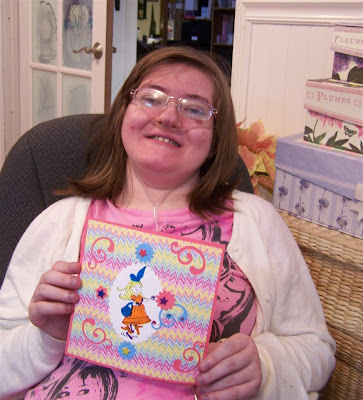 Now isn't that the most beautiful card you've ever seen? Of course it is! 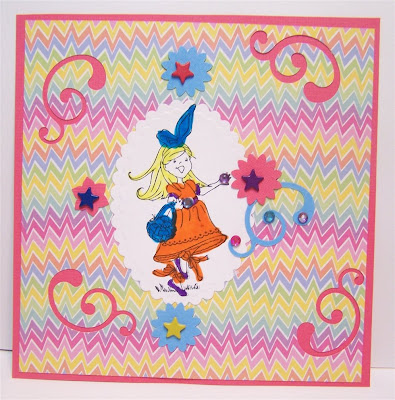 Thanks for stopping by!

Brilliantly written by Nancy Jensen at 9:21 AM 9 comments:

Grandma Taylor and Jessica hangin' out in the new craft room. Jessie has her own corner for her Barbie castle. What fun! Also, notice the necklace that Grandma is wearing? Jessica made it for her! Jess sure loves her grandparents. 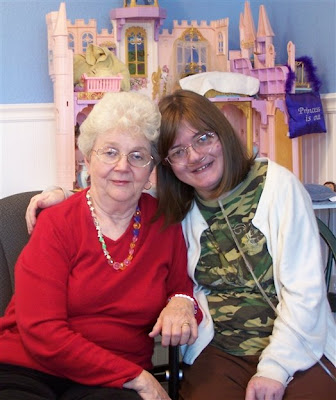 Brandon having a nap. He really was asleep! Don't worry, I woke him up and made him turn over... that is after Austin and I had a good laugh. 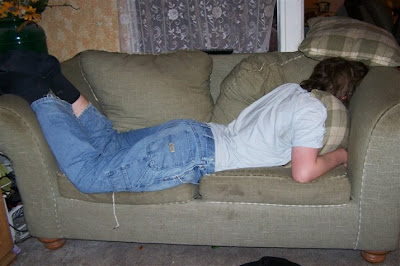 Charlie enjoying the sunshine coming in from the bay window in the craft room. Who says cats don't like birds? Charlie is cuddling with one in this picture - just look at his tail! 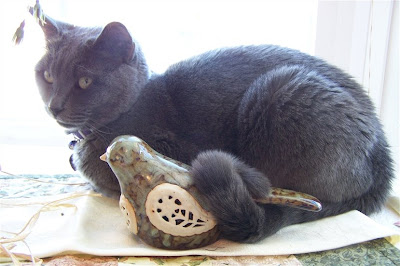 Charlie, are you all nice and warm laying on the heating pad? 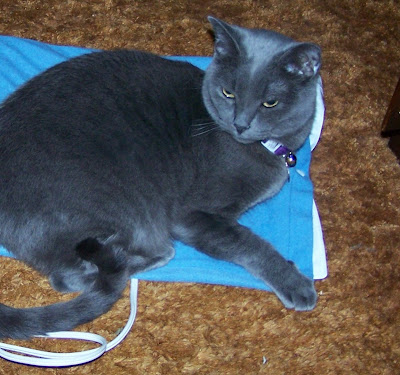 Too bad it's not even plugged in! 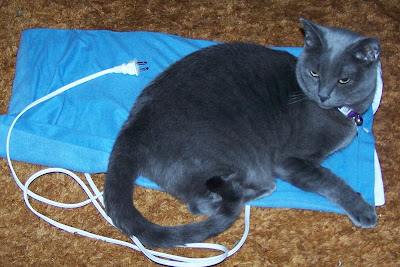 Notice how Charlie matches the blue heating pad. He is such a pretty color - Russian Blue. Too bad he's not very smart. LOL

I hope you enjoyed these random pictures. I'll be back soon to post more!
Brilliantly written by Nancy Jensen at 6:49 AM 4 comments:

Justen went out to play in the snow at 2:am on his 23rd birthday! It rarely snows here so it was a real treat! 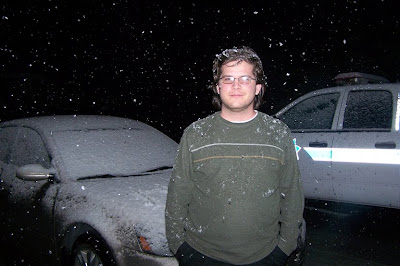 Here's another picture of him in the snow. I can't believe my baby is this old! Although he has quite a bad case of dandruff. LOL 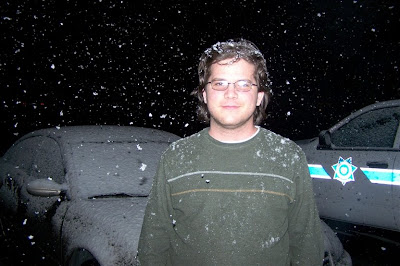 Graffiti on my car in the snow! I wonder who did it? 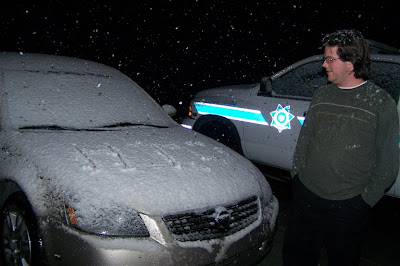 The snow stuck to the ground for a little while but it was gone by noon. 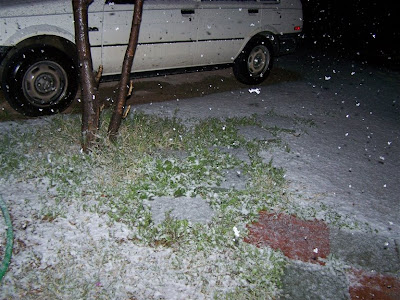 Life's a Bit Rough Around Here

But that's the way it goes. Miss Jess is in a lot of pain every day. The first thing she says to me when she wakes me us is: "Hi Mom. I feel HORRIBLE! and flops down onto my bed." I help her in the bathroom, make sure she's taken her carafate (meds for her tummy - has to be taken on an empty stomach) and give her some morphine. When it's time for her to eat, sometimes all she can eat is jello - or even just 1/2 of a small jello cup. She will drink some soda though. The last few days she has wanted a "Ham & Cheese Hot Pocket" so that's what she's had. She has eaten the whole thing or only left a bite or two. I'm so glad we have found something her tummy can handle. That is until she gets tired of them. She eats off and on during the day and will have a few snacks at night. I have to make sure she eats enough of her tummy will be in extra pain later. She gets morphine several times a day.... and she gets tylenol too.

Her sleeping is less than desirable... even if she gets to bed by 2:00am (which is early) then she will sometimes get up just a few hours later in pain and needing morphine and sometimes needing to eat. Sometimes she will go right back to sleep and sometimes she is up for several hours. Other times she may get very emotional and not even get to sleep until long after sunrise or even after Karl and the boys get off for the day - maybe 9:30am. It's getting to be hard work just to feed her and help her get her rest. I sometimes feel like I'm caring for a 130 lb, 20 yr old newborn with the schedule she has.

On top of all this my fibromyalgia has been acting up - as it usually does this time of year - and my poor body just can't figure out WHEN or HOW to sleep. I can't take a sleep aid because I have to be able to help her if/when she gets up. She takes enough sleep aids to put both of us out for 12 hours but that's another story. LOL!! Sometimes I stay up even after she is in bed because it is the only time I get where nobody is demanding my attention or needs something. I know it's not a good idea to do it too often - my body is really wanting to sleep right now, for instance - so I had better hurry.

The big news that I've been dreading posting is that Jessica really does have Ischemia of the bowels - both the GI doctor and the peds cardiologist checked out her CT scan. So in layman's terms... the artery that takes the blood to the gut is narrowing and she is getting less and less blood flow to that area. On top of that, due to her sturcture of her heart, she gets much less oxygen in her blood than normal so that's double trouble. Ischemia can cause pain (severe pain), diarrhea, constipation, an obstruction, necrosis and death. The only way to fix it is to do surgery and replace that section of the artery.... except that with Jess, that's not possible. Her whole artery system is going bad. Her whole bowel system is going too... She has to have 1 1/2 - 2 times the normal adult amount of Miralax just to keep her pooping every day. The only treatment possible is to give her morphine for the pain and more Miralax to keep her "going". The things we need to look for is vomiting and blood in her stools. These are signs that her intestines are necrotic and she probably won't survive more than a month or two. The GI doctor said that if that happens then we need to make the decision as to whether to take her to the hospital, call hospice or both. WHAT? I can't imagine her hanging on for a full 2 months while vomiting, etc. Karl and I have talked about it and if it comes to that point, we may have to discontinue all treatment except for pain relief. That would mean taking her off her heart meds too. Her previous pediatrician told me recently (when I told him about Jessica having 10,000 PVCs (arrhythmias) every day and her risk of ventricular tachycardia - he said, "that would be the best way for her to go, really"). He didn't say it in a mean way, he had been through all of Jessica's ups and downs including strokes, lung bleeds, etc. He meant it in a positive way. V-Tach would be fast. The GI thing..... not so much.

We have been chocking on this news. It just seems we get over on hurdle and we are faced with yet another way for her to die. I just don't want my baby to suffer. She has already been through so much... I just want her to be happy.


On the other hand, Jessica has been spending a LOT of time with Marcus. They go to Disneyland every night and ride all the best rides, have races as to who can eat their cotton candy the fastest and laugh and laugh. They even get to ride on Jessica's ride that she invented called "Genie's Magical Lamp". Several years ago Jess came up with the idea for this ride and has wanted Disney to make it. Every day Jessica gives me a hug from Marcus and I tell her to give him a hug back from me. She told me that every time she dreams about Marcus, it makes her sadness that he died go away a little bit more. I told her that I think it's awesome that she gets to spend so much time with him.... much more time than when he was alive. I also told her that Marcus is telling her that he is OK. {She has told me that the first few times she dreamed about him, she was crying and he asked her, "why are you crying?". She would tell him that it's because he died and that she missed him. He would then give her a big hug and smile and tell her that he was OK and that she didn't need to worry about him.} We talk about how he is having fun in heaven and he will be there for her when it's her turn to go home. Jess said that she isn't afraid at all when she is with Marcus. She even goes on the biggest roller coasters with him and doesn't get scared when in real life she is very afraid of heights and hates going on rides. I asked her if she has her oxygen on while going on the rides with Marcus and she said, "No! And I don't need my glasses either". She even said that she RUNS to him and they give each other a big hug. She says that everyone at Disney know her and Marcus and they let them go to the front of the lines and they don't have to pay either. LOL (it's just like Jess to be the center of attention and the center of every one's hearts!) Karen (my sister - Marcus's mom) told me that Marcus always was a daredevil and he loved to go on roller coasters so I'm sure he is enjoying his trips to Disneyland with Jessica too. Marcus missed his only opportunity to go to Disney when his band went but he was too sick with his cancer to go. Jess will never get to go to Disney - at least not while she's awake! LOL She is really glad for these dreams. I am so thankful for her dreams too. I miss Marcus. I miss Karen and her family too.

I am so grateful for my family and my friends. I can't get through this without you. It's been difficult lately with my being sickly and not being able to get out much. Seriously - sometimes I walk out to get the mail just so I can say that I went outside that day. I really need to try to go for walks... even short ones to try to get my mojo back. I have been making some cards and I did get to go to a card class last week. I am completely enjoying my new craft room that my dear, sweet husband built for me. I need to get it cleaned up a bit and post some pictures. You will be drooling! LOL

Thank you so much for stopping by and if you get a chance, head on over to my craft blog, FancyCrafty{Me} and oooohhh... and ahhhh... over my cards. :-P

Of course any prayers would be gladly accepted and appreciated.

((hugs))
Brilliantly written by Nancy Jensen at 4:53 AM 5 comments: