Happy Birthday to my sweet angel, Jessica. 23 years ago my whole world changed as we entered into the world of CHD. I love and appreciate everyone who supported and continues to support us.  Someday I may feel up to posting more on here but for now, Jessica knows how much I still love her and think about her daily.

Here are some photos from a web page I made back in 2000.  These are the 'early years'.  You can visit the site here.   I am adding a little extra explanation with these photos than what are on the angelfire website and have combined most of her story that is on this webpage.  Enjoy!

Jessica shortly after birth.  Alert and ready to take on the world! 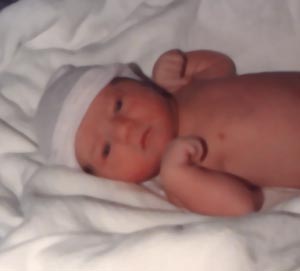 When Jessica was 2 weeks old she was diagnosed with multiple  heart defects. Some of these are: pulmonary artesia, VSD,  pulmonary stenosis and pulmonary branch stenosis.  click here to learn more about these heart defects  Jessica was in congestive heart failure and was hospitalized. Jessica spent much of her life in and out of the  hospital. Jessica was struggling to gain weight and every little cold or  illness would send her into the hospital. She was very "blue" and would cough and choke a lot. Jessica was diagnosed with GE Reflux and put on  medication for that. Finally the pediatric cardiologists felt that she needed surgery when she was 5 months old, even though she only weighed 10lbs. Jessica suffered a stroke with her first heart surgery and her right side was weak. The stroke was in the speech area of the brain and by 18 months of age, it was obvious that she was having extreme difficulty with speech and was trying desperately to communicate. Our home-bound teacher recommended sign language. We worked with the teacher and speech pathologist and only 6 months later Jessica could sign over 80 words! Slowly the speech came....being facilitated by the sign language. Jessica was also delayed in other areas due to the stroke. She didn't sit up until she was about a year old or walk until she was two. Her heart and body were weak, but her spirit was not! She was determined! 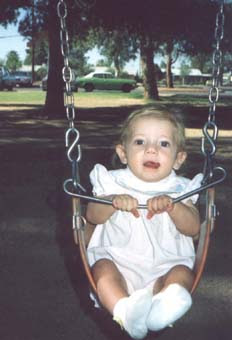 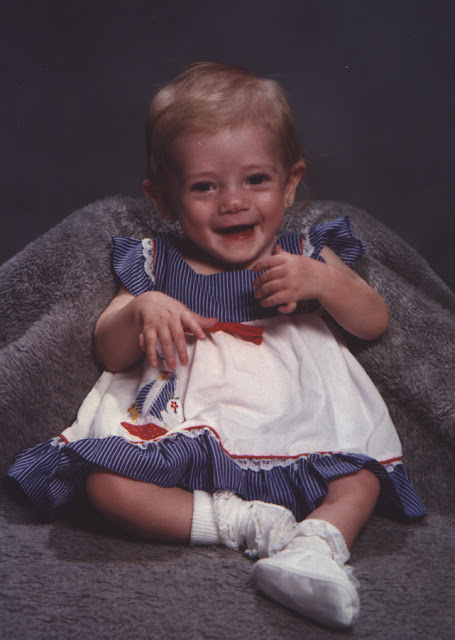 Jessica had surgery to remove her extra fingers and toes.  Here she is with her older brother, Justen 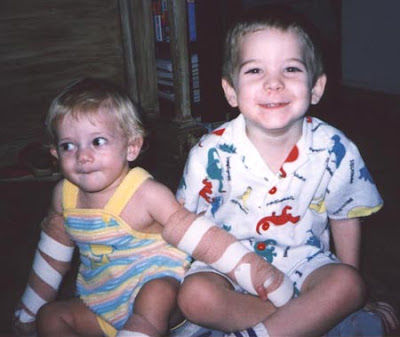 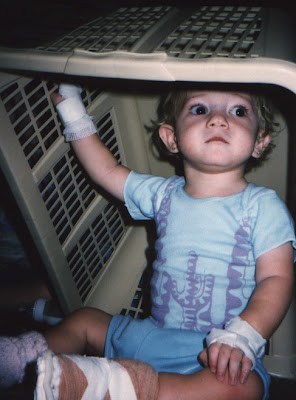 Jessica and her brother, Justen...1991
Jessica used mostly sign language at this age due to a stroke she suffered during her first heart surgery when she was 5 months old. The sign language facilitated the speech and language skills. She did learn how to talk... but she didn't learn how to STOP talking.  haha!  She once said about her talking all the time, "It's what I do best!"  She did a lot of things "best". 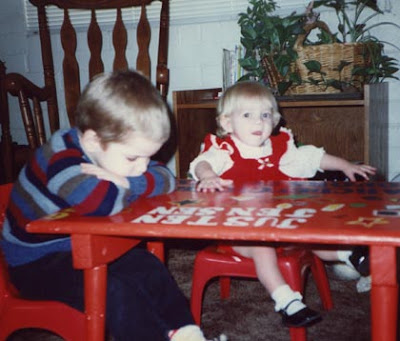 At age 3 when Jessica's shunt was to be replaced...the shunt was
accidentally cut and she hemorrhaged out and went 8 min. with out receiving oxygen to her brain and suffered a 2nd, massive stroke and bled for days.
She also caught an infection in her blood and 4 days after surgery we
were called to the hospital early in the morning to spend her last hours
with her. She was bleeding, having seizures and with the infection surly
would die. God blessed us immensely and she stopped bleeding on her own
after losing 1/3 of her blood volume in only 4 hours. She was in a
medically induced coma for a couple of days in order to completely stop
the bleeding. 10 days after surgery she finally came off the ventilator.
To our dismay she was blind and her left side was paralized. We thought
to ourselves, what have we done! After several days of waiting, tests,
and many prayers, Jessica received her eyesight enough to be able to see
her mommy and daddy. She was finally calm and could take comfort in
them. She finally came home from the hospital a couple of weeks later a
very sick little girl who had to learn to sit up, stand, walk and talk
all over again. But this awesome, strong-willed child showed everyone
what faith and hard work can do. She did learn to do all those things
again. I always said that her motto is: "I'm not going to let a little
thing like heart surgery and a stroke get me down!"

Here she is with Santa.  She was also afraid of him at that age but sat on his lap for the picture anyway... she began to realize that he wasn't such a bad guy after all.  hehe 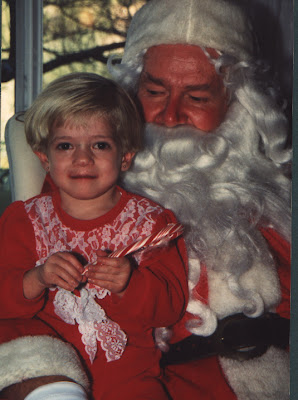 Pictured below: Jessica recovering post-surgery.  She had to have her arms strapped down or she would pull out her tubes and wires.  We covered her incision and 2 chest tubes so her brother, Justen, wouldn't freak out when he saw her.  He was always so concerned about his sister and hated to see her "owies".  I only have two photos of her in ICU - none with her intubated - because I knew I would never forget what she went through.  A part of me wishes that I would have taken those photos so others would see how strong she was and what she and other CHD children go through.  She looks so sad... she was very depressed until she went home.  She perked up when she was able to be at home and be with her brother.  Jess had to re-learn how to walk and talk..and even had to relearn how to sit up.  We had to start at square one all over again. 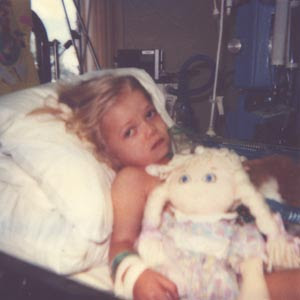 Jessica was 5 years old when she needed her 3rd heart surgery.  Jessica recovered much better this time and 7 months later had surgery #4. The surgeon came out of surgery very discouraged and told us that "there was nothing more that they could do". Jessica's pulmonary arteries had not been growing. Within a few months of that surgery Jessica was becoming incredibly "blue" and was needing oxygen more and more. Finally a cath showed that the conduit which had been placed between her right ventricle and pulmonary artery was allowing a lot of blood to flow away from her lungs and into the heart. Surgery was needed again to close off the conduit to give Jessica more time and improve her quality of life. Jessica did much better this surgery, largely because the incision was only a few inches long. Jessica came home 5 days after surgery!  (My 3rd child, Brandon, was only 2 months old when Jess had her 3rd heart surgery... and when Jess had her 5th heart surgery I was 6 months pregnant with my last child, Austin.  After Jessica's 4th heart surgery and we knew she would not survive her CHD we thought she would never have another heart surgery and we decided it would be best for us to not have another child - how could I care for a dying child while being on bed-rest?  - I was on bed-rest with my pregnancy with Brandon - but I've learned to not tell God "I'll never do --- "  Because Jess had her last surgery when I was having my last child.  It was a good thing she did so well because once we got her home and she was doing well I developed toxemia and was put on bed rest.  I still don't know how I did it - but I couldn't have done it without the Lord's help.)

Pictured below: Jessica at Project ABLE, a special ed preschool program through the public schools for children ages 3 - 5.  She sure blossomed through this program.  By the way, she was terrified of balloons and those were real balloons in the photo below.  She cried a little but I was able to get her to calm down for the photo.  Just one of the million times she was brave. 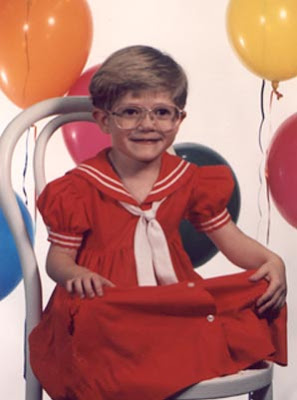 I made Easter dresses that match!  I don't remember the exact year that this picture was taken but Jess must have been about 6 yrs old at the time.  She loved that dress and hat.  This was before she had to wear oxygen 24/7.  She only had to have it when she had "tet spells"... where she would over-exert herself and get extremely short of breath and "blue". 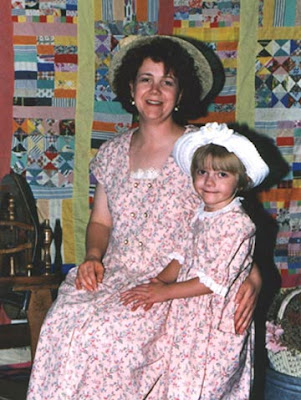 Jessica on her way to Dietz Elementary school. Her last year in grade school!  Jessica's heart defects prevented her from walking around very much without having a 'tet spell' (explained above) so she needed a motorized wheelchair. By this time she needed the oxygen constantly.  She was such a trooper!  She learned how to drive her wheelchair very quickly and enjoyed the freedom it gave her. 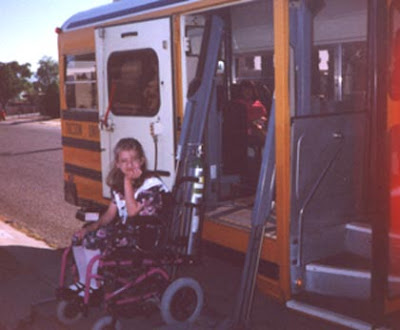 Jessica swinging 1999.  Yes, she would swing with her oxygen on and I would have to make sure that she didn't get it caught onto anything.  That girl never learned to watch out where her oxygen was.  If she wanted to go somewhere - she would just go.  Many times the oxygen would get caught and come off.  She hated going back to unhook it so she oftentimes just kept going and I (or her brothers) would have to get it for her.  I would tease her that most of my appliances stop working when they come unplugged so why is she still going?  She would answer, "Oh Mom!" in a joking tone.  When Karl would tease her she would say, "Daddy!" in the same tone. 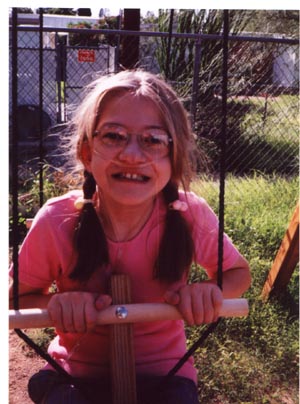 Jessica gets to sit in the search and rescue helicopter at a local fair and demonstration.  She was a little nervous but she did it!  We didn't get to ride in it but she was so proud of herself that she was able to get inside.  They showed us the medical equipment that they carry in the helicopter - sadly we knew what most of it was due to our experiences at the hospital.  She had already had all of her 5 heart surgeries by that time. 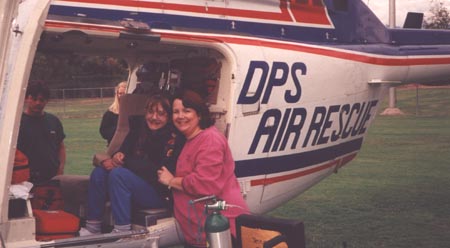 Jessica and Dad... She sure loves her Daddy! 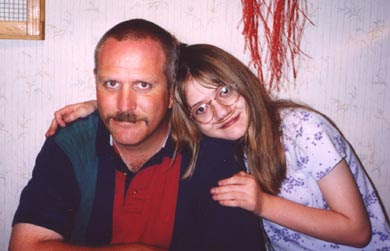 September 2000 - I made that dress for her to wear.  She always liked wearing dresses for school photos.  We weren't able to buy them every year but I'm so glad I have this one.  It seems that they had Jess take off her oxygen for the school photos... trust me, she was needing it more and more so it's gotta be nearby. 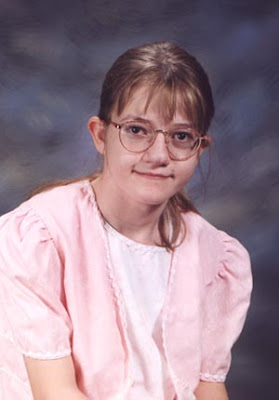 In 2001 professional photographer from LA came to take pictures of Jessica and other children involved at the "Tu Nidito" support group. 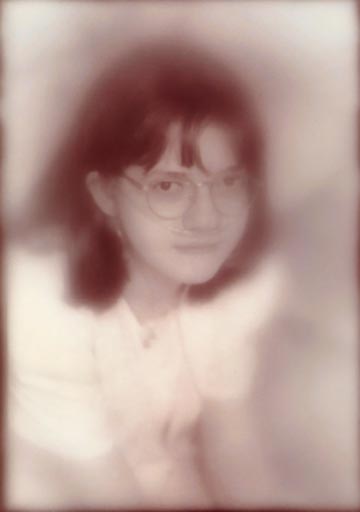 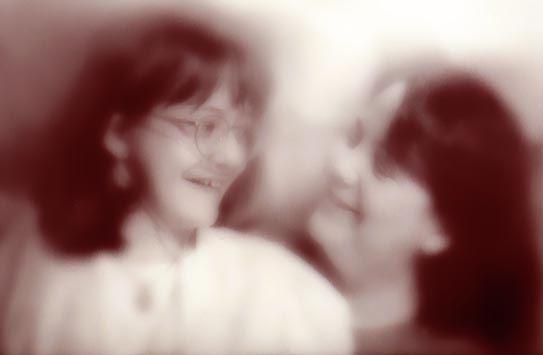 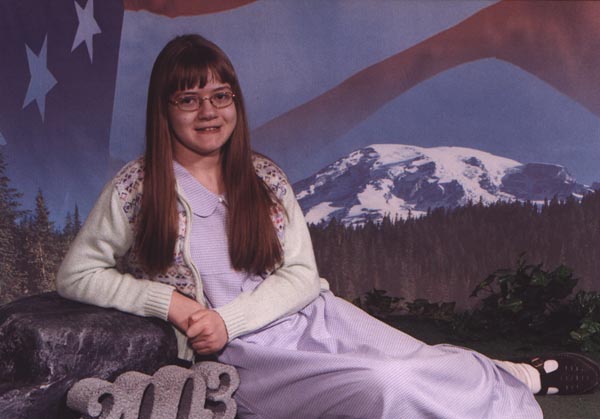 Sergio Lopez took the following pictures and many others of Jessica and our family on Aug 19, 2004.  Jessica had been admitted into hospice due to daily lung bleeds.  An anonymous family from our CHD online support group through TCHIN paid to have family photos taken.  I'm so glad we have these great photos! 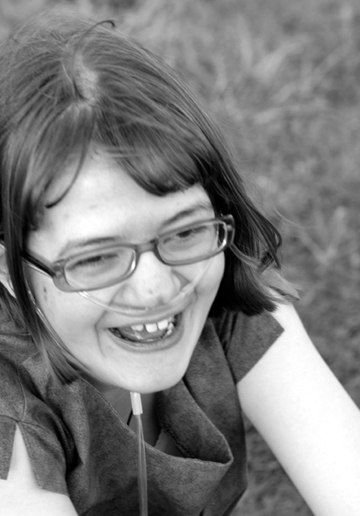 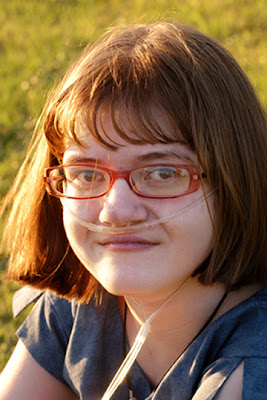 Fortunately our hospice nurse convinced the pulmonary doctor to start her on morphine therapy to prevent the lung bleeds... and it worked!  A year later Jess was released from hospice due to not having lung bleeds in several months!
More photos from 2004
Jess and her parents, Nancy and Karl 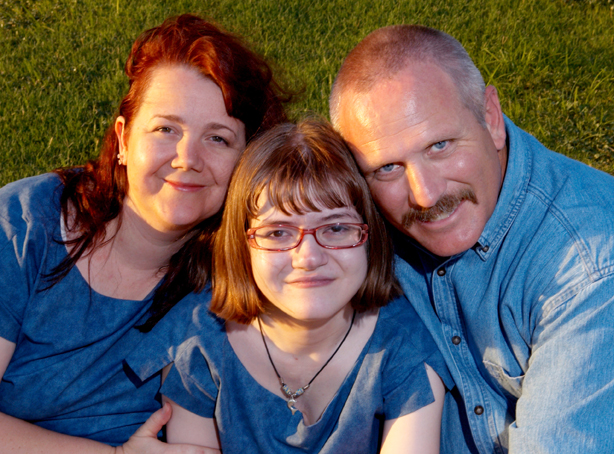 Jessica and brothers (oldest to youngest) Justen, Brandon and Austin 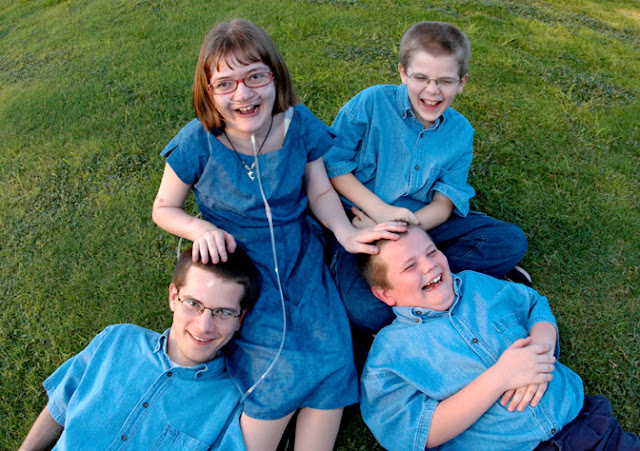 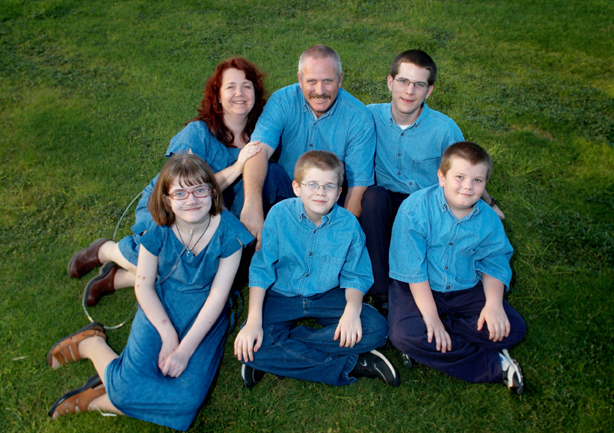 I'll try to post more to her life story later. Thank you so much for visiting and I hope you will leave a little comment for Jessica's birthday today.
Brilliantly written by Nancy Jensen at 12:13 PM 5 comments: