Saying Goodbye ~ but only for a time

Continuing with CHD Awareness I am posting a photo from a very difficult time in our lives. I haven't shared it with anyone until now. This was something that I knew was going to happen from the time Angel Jess was only 6 years old but since she kept pulling through each and every major illness, heart issues, GI issues and even lung bleeds it seemed almost impossible that my worst nightmare would actually come true. Sadly, this is what CHD looks like for far too many families. 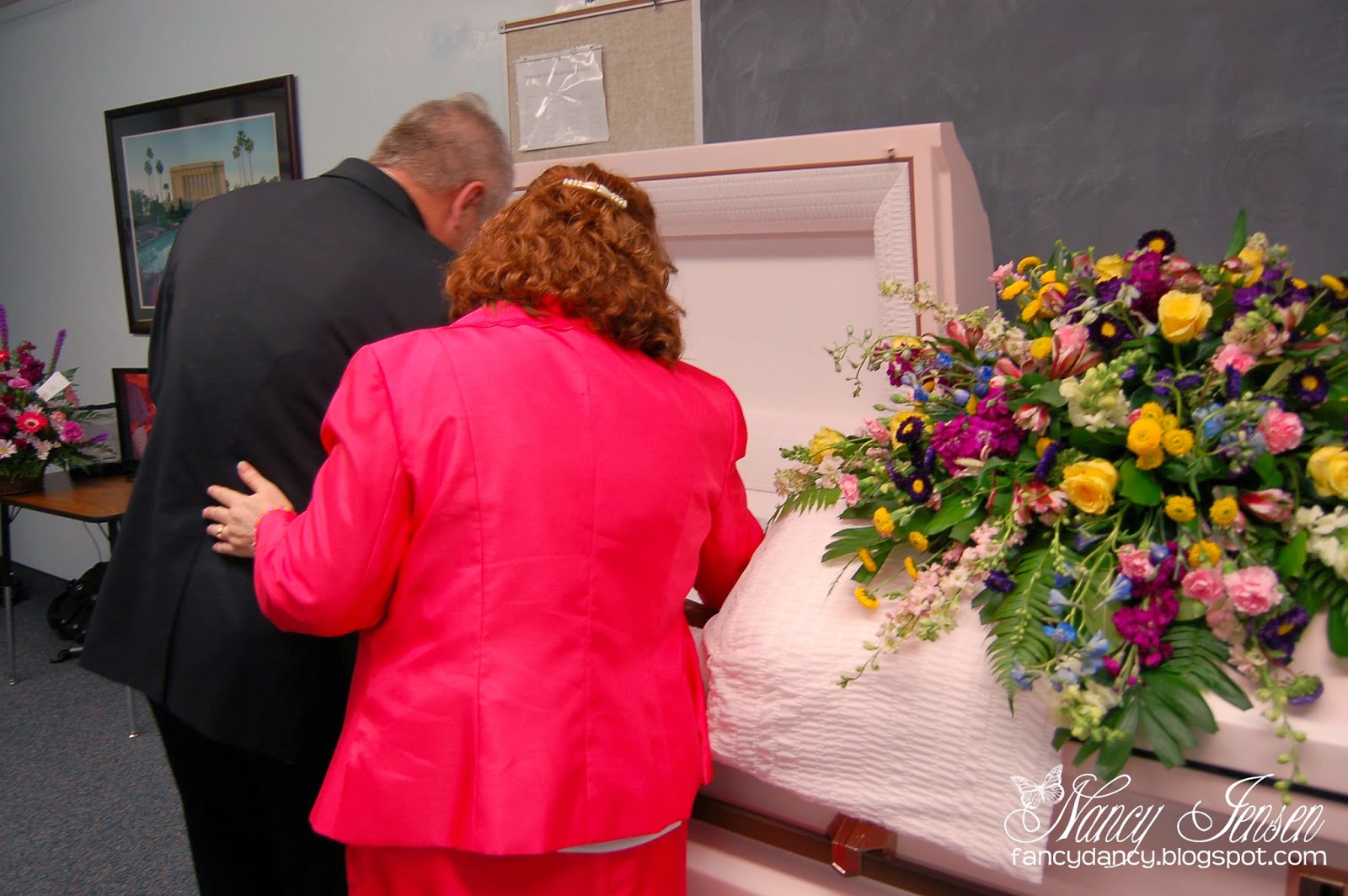 It was hard for me to share this tender moment of Karl and I saying goodbye to our beautiful daughter.  We carefully chose her pink casket with the light pink lining.  We were given a beautiful tiara for her to wear and a friend sent her a heart pillow with roses on it to place in her hands.  We didn't get a photo of that pillow which made me sad but things happened so fast. It arrived late and someone brought it in to us right before the services started.  It's ok, we truly appreciate the beautiful gift.

One day in July of 2010, out of the blue Jessica started talking about her cousin Marcus who had passed away in 2008.  She suddenly changed the subject towards herself and that she wanted to be buried in a white dress with pink flowers on it.  We had no idea that she would need it in just a few months!  When it became evident that she did not have much time left, my sister Karen sent us this beautiful white dress and I hand-sewed the pink flowers onto it. The dress is spread out on top of a Harry Potter quilt that one of Jessica's teachers (Barb) made for her. 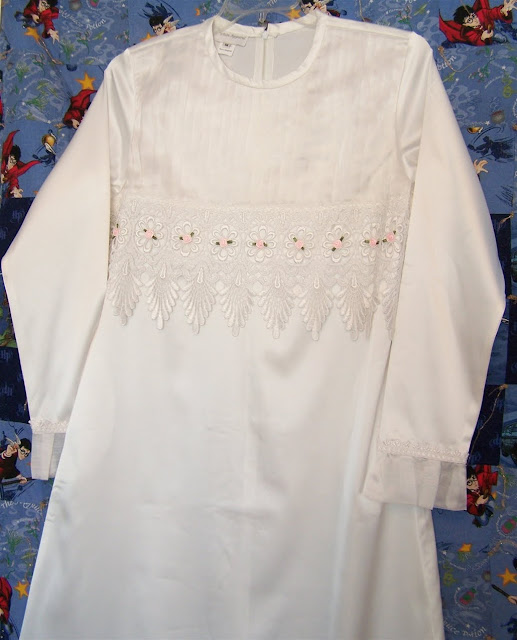 Here's a close up of the little pink roses and lace. 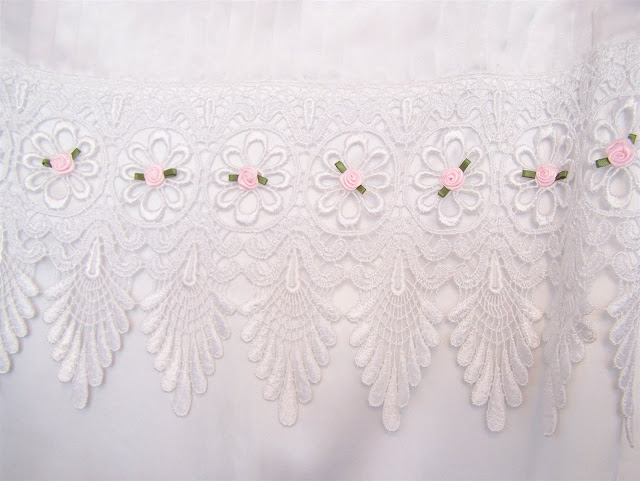 One of Jessica's e-pals, Matt (also a CHD survivor), sent her this little angel many years ago.  I pinned it onto the dress as a symbol of his love. 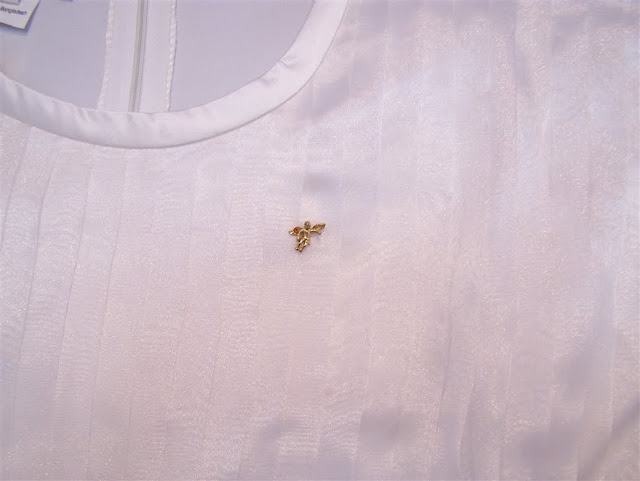 I posted more photos of the flowers that we received in this post HERE.

My husband Karl and I have been married almost 30 years (in April!).  We were married in the Mesa Arizona Temple of the Church of Jesus Christ of Latter Day Saints.  We believe in being sealed together forever in these temples where there are no "until death do we part".  Our children are sealed to us forever as well.  If you look to the left of my husband's shoulder you can see a photo of that very same temple hanging on the wall.  We did not put that photo there.  It was already on the wall.  How amazing it is to look at this photo and to see that reminder that Jessica will remain our daughter for all eternity!

Our Mesa Arizona Temple of the Church of Jesus Christ of Latter Day Saints also has a Visitor's Center where the public can go and learn about our beliefs.  If you don't live close enough to go there and would like to know more then please visit LDS.ORG .  There's a lot of good stuff on there!

There isn't a day that goes by that I don't think about my beautiful Angel Jessica Marie.  I miss her so very much but I am soooo thankful that she will never again suffer the pain and trauma that she endured in this life.  She was so beautiful in this dress and I envision her dancing, singing and chasing butterflies in heaven, free of all the diseases that plagued her body. 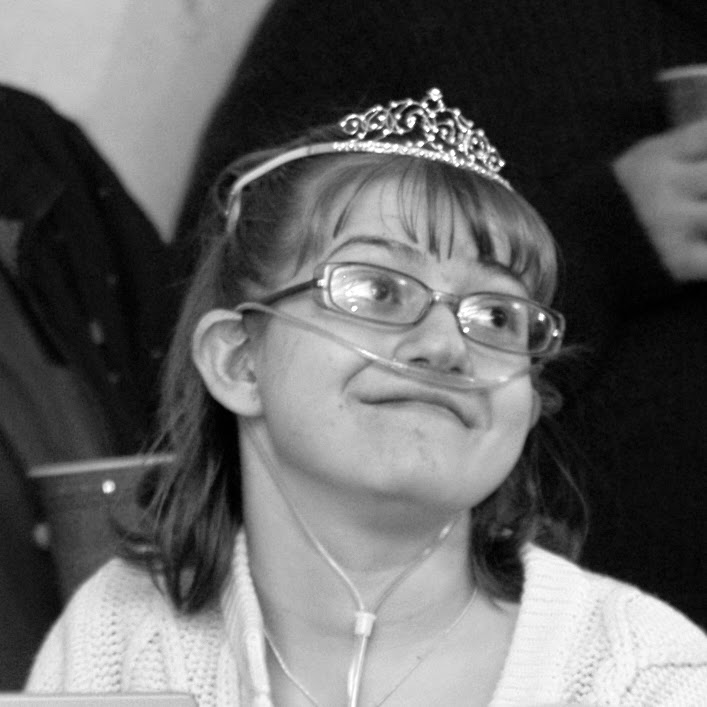 Brilliantly written by Nancy Jensen at 9:26 AM No comments: 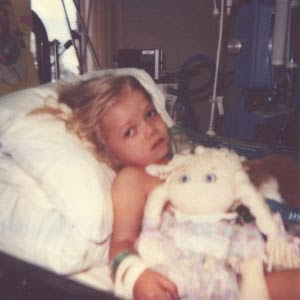 This photo was taken after Jessica's 2nd heart surgery. My 5 year old son was scared to go into the PICU to see her and the only reason they allowed him in was because he was going to stay with my parents and I didn't want to send him away without him even seeing his sister and knowing that she hadn't died. A nurse took this picture to show him before he entered the PICU so that he wouldn't be quite so scared. We brought Jessica's doll and stuffed animal and placed them around and on top of her so that he wouldn't be afraid of her incision and the tubes and wires on her chest. {Too bad we didn't know back then that he had Aspergers (autism spectrum) back then and that's why he would freak out so much when he saw his little sister with tubes and wires, etc.} This was the surgery from when she hemorrhaged, had a massive stroke, was blind and paralyzed for a while and had a blood infection. At the time of this photo Jessica had barely regained enough eyesight to focus on something for a few seconds and then her eyes would drift up to the right. She couldn't control where they were looking and we didn't know how much she could see because when she could key in on something sometimes she would cry out as if she was afraid of whatever it was she was looking at. 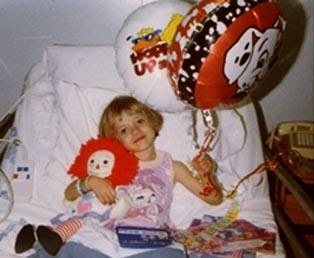 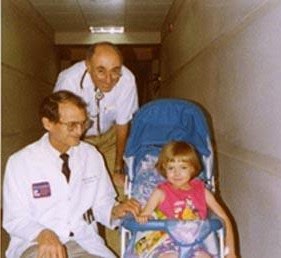 The first photo is after Jessica's 5th heart surgery which went VERY well.  The other photo is of Jessica posing with Dr Donnerstein (on the left) and Dr. Goldberg (one in the back).  Both of these photos were taken right before we left the hospital to go home.   Dr. D and Dr. G are two of the pediatric cardiologists who cared for her over the years. Dr. D was the one who diagnosed Jess when she was 2 weeks old and he followed her until he retired when Jessica was 20. We joked that Jessica put him into retirement from all the stress she gave him throughout those 20 years. He came to her PC visits even after he retired but he came as a friend. He was very kind and caring. He stayed at the hospital all night the night that Jess was hemorrhaging and kept going back into surgery. Once a patient is handed over to the surgeon they usually step back until the after the surgery and the patient is released but Dr. D felt as though we were family. He was a great source of support to us all those years.
I didn't take many photos of Jess when she was in the hospital, especially when she was in the PICU. It was so very hard on me that I knew I would never forget and I felt like I was invading her privacy if I took pictures of her hooked up to all the machines and monitors, so I didn't take photos... but now I wish I had. I want others to know what an amazing soul she was and what she endured. Jessica's legacy of hope and love lives on but I feel like I could have done her story more justice with more photos of her difficult times. I am thankful that I went camera-crazy and took a lot of photos of the better times because sometimes those good memories are all I have to push out the flash-backs of the bad times.
To read more about her 5 heart surgeries please follow this link:
FIVE Heart Surgeries

I am going to be posting CHD (Congenital Heart Defects) facts and sharing Jessica's story as a way of bringing awareness to CHD.

Jessica almost died as an infant due to her undiagnosed CHDs. Miss Jess was born on 6-3-88. My labor was fast and furious! In fact, the nurse had to grab a doctor out of another room to come and catch her. lol I had a scan just two weeks prior to her birth and the technician seemed to spend quite a bit of time looking at the heart. We asked her if there was something wrong and she said no. I vaguely remember her going out of the room and then coming back with someone who looked at the scan and said that everything was ok. I was sent home and nothing more was said. After Jessica was born and sent to the nursery a doctor came in and said that she heard a heart murmur but it was most likely caused by the ductus which usually closes at birth and hadn’t closed yet. We were told "DON’T WORRY" many times but just be sure and take her to her 2 week appointment. All the concern was focused on Jessica’s polydactyly – she was born with 2 extra fingers and 1 extra toe – just like ME! We had no insurance at that time so we were given the phone number to a clinic that helps children born with different types of defects. We had no idea that we would practically live at that clinic and the hospital for several years to come. Jessica and I were sent home just 24 hours following her birth. We were told that they had done a pulse-ox test and it was low but in normal range and again to take her to her 2 week appointment.
A few days after Jessica was born she was jaundice so I took her in to see the pediatrician and was sent home with instructions to put her in the sunshine for a couple of hours each day. That pediatrician said NOTHING about a heart murmur and I was quite overwhelmed with having a 2 year old, a newborn, worrying about surgery to remove the extra digits and managing apartments while trying to recover from the delivery that I didn’t even think to mention it. A couple of days after that I went back to the hospital for breastfeeding support. Jessica was having a hard time feeding and I thought it was my fault. Granted none of the support staff were doctors but none of them seemed to notice that she was breathing hard and that was why she wasn't able to eat well. Even the day before her 2 week appointment when Karl accidentally inhaled chlorine gas when working on the pool at the apartments where we were managers and we stayed in the ER most of the day to get his O2 sats up, NOBODY, even the doctors and nurses who ooohed and awwwed over our baby girl, noticed that she was in trouble! That night Jessica would latch on and frantically try to nurse. She would pull back gasping for air and then fall into a deep sleep. She would wake up again only to repeat the previous scenario. If I hadn't already had an appointment the next day I would have taken her to the ER.
Karl was still recovering from his chlorine gas experience so I took Jessica to the appointment alone and a friend took my 2 year old son, Justen for me. When the nurse weighed her I noticed that Jess had gained 2 whole pounds so I tried to calm my nerves by telling myself that she really was gaining weight so she must be fine. That calmness was shattered when the first thing that the pediatrician (different one) asked, “Is she always this blue?” He did an exam and said that she was breathing too rapidly and that the murmur was really loud. He left the room for what seemed like forever to return and told me that Jessica had an appointment with a pediatric cardiologist in 2 hours at the hospital and for me to NOT MISS IT! The doctor, who I found out was a resident, had just done his peds cardiology rotation and told me that the PC (peds cardiologist) was a really good one and very nice.
Jessica shortly after she was born 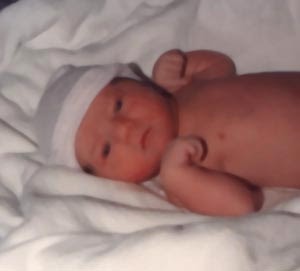 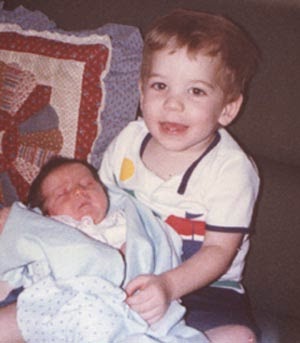 Brilliantly written by Nancy Jensen at 7:37 PM No comments: