As usual I'm a day late and a dollar short. There was a blog party going on last week which was hosted by 5 minutes for mom. Apparently some of the coolest bloggers are still partying and visiting other blogs. So head on over and par-tay! (click on the banner above)

They gave away quite a few prizes and since I missed out, I'll have to try to remember to party with 5 minutes for mom again next year.... but next time I will try not to be so late! At any rate, they always have some type of prize or cool thing happening over there so go visit them anyway. That site is run by identical twin sisters who are raising families and work from their homes. Their site says: Bringing Moms the best in Blogging, Shopping, Parenting, and Entertainment.

Thanks for stopping by! And to any of you who came by from the blog party before I got my banner posted, I totally forgot to do it! Gah! So sorry! But it's up now!

Feel free to leave a comment. Everybody loves comments! ;)

Brilliantly written by Nancy Jensen at 9:39 AM 2 comments:

I can't believe that it's award-winning time again already. I don't usually watch the award shows. Don't hate me, but I really don't care who wins the Oscar, Tony, or Golden Globe.

So why am I blogging about the awards?

You don't have to wait much longer... I know that the suspense is killing you..... but that's what they do on those shows, isn't it? They make you wait until the very last moment to build the suspense... until you are sitting on the edge of your seat, just waiting for the news....

And the winner is:

ME!!!! I won an award! I know, you can't believe it. I can't believe it! But here I am. Just a regular mom blogging about normal life things. That is, the "normal" life of a family. A family with 4 kids, all of which have their own special needs which include: Aspergers (a form of austism), ADD, ADHD, asthma, depression & anxiety... and that's just my 3 boys. That doesn't include my daughter who has congenital heart defects, asthma, lung bleeds, strokes, 5 heart surgeries, extremely low oxygen saturations, is on oxygen and terminally ill. Yup, I blog about my normal (boring) life. But I still won an award. Amazing, isn't it?

So what's the award I won? It's the xxtraordinary blogger award! See? 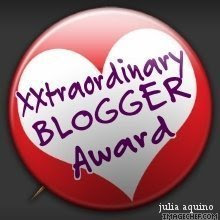 Dan from Chez Oddness honored me by giving me this award. Thanx Dan!

So what do I blog about that is so xxtraordinary? I'm not sure. I'm just ordinary and normal... whatever NORMAL is. LOL

Yeah, I blog about MY normal. MY normal may not be the most thrilling blog to read. It may not take you on trips around the world and show you amazing sceneries. It may not be the most entertaining blog around and leave you chuckling as you read the lines I type. But it is MY life. And do you know what? I wouldn't have it any other way. I wouldn't trade any of my children or my husband for anything.

This afternoon as I was napping, I dreamed that we were trying to buy a bigger house and that we were so strapped for cash that I woke up in a panic. As I opened my eyes and saw that I was home, I was so relieved. I love my home which of course includes my kids and hubby. I've been sick for two months now and was finally feeling a little better but then it came back with a vengeance today. I slept most of the day while Karl took care of the kids. It's been stressful being sick and trying to take care of my home and family. I also know that I'm having some stress about my oldest son getting married and leaving home, but who doesn't at this stage in life? Am I right? I know I am. My mom gets great pleasure in telling me how hard it was on her each time one of her children (including me) got married. She did it 6 times! I think I will get through this.

So you see? My life is kind of normal. But not TOO normal. Not so normal that it's boring. After all, I've passed 20,000 hits to my blog in less than a year. I intended to have some sort of prize for the 20,000th visitor but alas, it came and went without me even noticing what day it happened. Maybe I'll do it for the 30,000th visitor? We'll see... hopefully my family and I will be feeling better by then.

Thanks to all who enter this blog! I see that I've had several new visitors and I hope you will not be bored out of your wits, but that you will come back again. And to all of you who come here and read, I thank you too! I blog for my own benefit... it helps to get things "out", but it's nice to know that others care. You care about me and my family. I know many of you come here to check on my precious daughter, Jessica. She is amazing and blesses me every day. I am so glad that so many of you love and care about her too. She is sick with the cough/congestion right now but is not only taking her many asthma meds, but she is on prednisone too. She is NOT in dire straights, she is actually handling this illness quite well. She's my little energizer bunny... she keeps going, and going, and going...! and it wasn't her that the ambulance came for a few nights ago. It was my husband, Karl. He had been sick, severe coughing and congestion, and had returned to work (against my better judgment). After working all day, he was spent. He tried resting in the bedroom but was coughing practically constantly. He tried to come out to the family room but went into the kid's bathroom to lean on the sink as he collapsed to his knees. I came looking for him and he could hardly breathe. I called 911 and he laid on the floor with his head on a big package of toilet paper rolls. (LOL). The paramedics came and helped him into the living room where they took his vitals. He seemed to be doing a little better but he was still coughing up phlegm, had a fever and his heart rate was up. Jessica was crying, the younger boys were coming out of their room to see what the commotion was and Justen was not home. I called Karl's parents who live across town. They agreed that I should stay at home with the children and they would meet up with Karl at the hospital. The ambulance took Karl at around 11:00pm and he didn't get home until after 4:00am. He was diagnosed with acute bronchitis and given prescriptions for several meds. My in-laws stayed with Karl all that time and brought him home. They aren't spring chickens anymore and I'm sure it was hard on them to be up all night. I am so grateful to them that they were able to help out in that way. I know, Karl is their son and I know I would do the same for any of my sons. Heaven knows I've done it a billion times already for my daughter! But thanks again, Mom and Dad.

Poor Justen got home and saw the fire truck in front of our house. He saw the paramedics going into our house and just then the ambulance pulled up. He thought the worst - that Jessica had died or was dying. He came inside and saw Jessica standing there, crying. He was relieved that she was ok and since I was standing by her, letting her lean on me, he knew that I was ok. He still couldn't see who was on the couch because so many paramedics were in the way. He remembered that Austin has been sick for 3 weeks and has asthma, he then wondered if Austin was ok. Just then he was able to see that it was his dad sitting on the couch, talking to the paramedics. He told me later that he was relieved because he thinks of his dad as being a big, strong man and that he would be ok. I'm just glad that Karl wasn't having a heart-attack... that is something that he is at risk for because his cholesterol is high - but that's another story for another blog post. haha.

Jessica thanked the paramedics for coming and helping her dad because he is her hero. She also told them that they came to help her when she was coughing up blood a few years ago.

So maybe my life isn't quite as boring as I thought. I guess "normal" doesn't have to be boring. In fact, sometimes I wish my life were a little more boring and less medically interesting? LOL

So now it's time to pass the award on to 5 xxtraordinay bloggers.

First, I give the award to my sister, Karen, at i made it through another day. Her oldest son is battling brain cancer. Her blog is about Marcus, cancer and how cancer effects the rest of the family. They are an amazing family and my nephew, Marcus, is an amazing young man. I hope you pop on over there and at least see the picture of her 4 boys at the top of her blog. That picture makes me smile. They are such great kids!

I give the award to Julia from My Adventures and Antics. Julia has a son with CHD (congenital heart defects) and just recently had her 5th baby! Yes, she has 5 children and still blogs, takes the most amazing photos of the kids, and offers her prayers and support to me and my family. I think she is secretly SuperMom!

Awesome Mom from Adventures of an Awesome (Sometimes) Mom deserves this award! She has two adorable little boys who keep her on her toes. One of the two boys has CHD but I sometimes forget which one since he is so active! She is into knitting and made the cutest dinosaur for her son's birthday!

June at The Burnett Clan in Co has two awesome teenagers, one of which has CF (cystic fibrosis). June's blog is about her family, losing weight, her views on political issues and some fun things mixed in. June is very supportive of me and my family. She's a sweetheart. I hope she accepts the award. ;)

Last, but not least, I give the award to Jennifer at Jennyhaha's Flaw and Disorder. She has a way with words that makes you giggle as you read about her adventures of having 3 "toddlers" and another baby on the way! Yes, I think she's insane - but a sweetie too. One of the twin girls had heart surgery a few months ago. She did very well and is back to her normal, little girl self. Jenny offers humor and support.

And so I come to a close on my award receiving & giving post. I'm on my way to bed and not a moment too soon. I'm tired and sooooooo sleepy.
Brilliantly written by Nancy Jensen at 12:56 AM 9 comments: